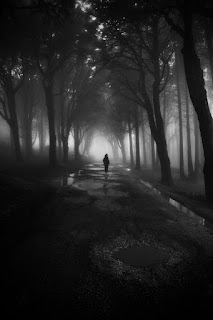 I'm reading Peter Carruthers's newest book, Human and Animal Minds. I was struck by this passage:

In general, [phenomenal consciousness / conscious experience] is definitely present or definitely absent. Indeed, it is hard to imagine what it would be like for a mental state to be partially present in one's awareness. Items and events in the world, of course, can be objects of merely partial awareness. Someone who witnesses a mugging... might say "It all happened so fast I was only partly aware of what was going on." But this is about how much of the event one is conscious of.... The experience in question is nevertheless determinately present.... Similarly, if one is struggling to make out a shape in the dark as one walks home, still it seems, nevertheless, to be determinately -- unequivocally -- like something to have a visual experience of indeterminate shape.... I conclude that we can't make sense of degrees of phenomenal consciousness (2019, p. 20-23, bold added).

In my draft paper, Is There Something It's Like to Be a Garden Snail?, I also discuss this issue, expressing ambivalence between the perspective Carruthers articulates here and what I call the "bird's eye" view, according to which it's very plausible that phenomenal consciousness, like almost everything else in this world, admits of in-between, gray-area cases.

My main hesitation about allowing in-between cases of phenomenal consciousness (what-it's-like-ness, conscious experience; see my definition here, if you want to get technical), is that I can't really imagine what it would be like to be in a kind-of-yes / kind-of-no conscious state. As Carruthers emphasizes, imagining even a tiny little smear of indeterminate, momentary consciousness is already imagining a case in which a small amount of consciousness is discretely present.

But this way of articulating the problem maybe already helps me see past the puzzle. Or at least, that's my conjecture today!

For analogy, consider this following argument by George Berkeley, the famous idealist philosopher who thought that no finite object could exist except as an idea in someone's mind (and thus that material objects don't exist). In this dialogue, Philonous is generally understood to represent Berkeley's view:

Philonous: How say you, Hylas, can you see a thing which is at the same time unseen?

Hylas: No, that were a contradiction.

P: Is it not as great a contradiction to talk of conceiving a thing which is unconceived?

P: The tree or house, therefore, which you think of is conceived by you?

H: How should it be otherwise?

P: And what is conceived is surely in the mind?

H: Without question, that which is conceived is in the mind.

P: How then came you to say you conceived a house or tree existing independent and out of all minds whatsoever?

P: You acknowledge then that you cannot possibly conceive how any one corporeal sensible thing should exist otherwise than in a mind?

Therefore, see, there are no mind-independent, material things! Whoa.

A: Can you visually imagine something that exists but has no shape?

A: Therefore, everything that exists must have a shape.

The problem with A's argument is that he is assuming a certain kind of psychological test for the reality of a phenomenon -- in this case, visual imagination. Because of how the test operates, everything that passes the test has property A -- in this case, a shape. But the test isn't a good one: There are things that might fail the test (fail to be visually imaginable) and yet nonetheless exist (souls, numbers, democracy, dispositions, time?) or which might be visually imaginable but with shape as only a property of the image rather than of the thing itself (if, for example, you visually imagine a ballot box when you think about democracy).

[ETA: See update at the end of the post]

Okay, so that was a long preface to my main idea. Here's the idea.

Update, Jan. 10 Margaret Atherton and Samuel Rickless have suggested that I have misinterpreted Berkeley's argument in an uncharitable way. The central point of the post does not depend on whether the bad argument I attributed to Berkeley is in fact Berkeley's argument -- it's merely meant as a model of a bad argument, where the fallacy is clear, which can be applied to the case of imagining experiences that are in-between conscious and nonconscious.

Rickless's interpretation, from his book on Berkeley, is that this passage fits with what he calls Berkeley's Master Argument:

The crucial dubious premise here is that anything that is conceived is an idea (the Idea Schema). Possibly, this still instantiates the general pattern of reasoning that I criticize in this post: the inference from the fact that all X that I conceive of or imagine (in a certain way) have property A to the conclusion at all X have property A (where in this case X is an object and A is the property of being an idea).