The Most Efficient Machine Ever Invented 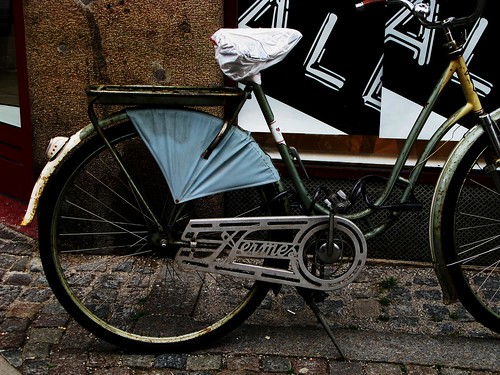 So I read an article in The Independent - a link sent by Claus - wherein it stated that "The energy efficiency of a bicycle has been estimated to be the equivalent of the average car doing 1,600 miles on a gallon of petrol."

For the roughly 6 billion of us who don't know what a gallon or a mile is, that is about 640 km per litre.

Lovely numbers. Does anyone know where this estimation originates? I'm curious.

The article has some cool quotes. I've seen them before, but repetition is sometimes nice:

Iris Murdoch: "The bicycle is the most civilised conveyance known to man. Other forms of transport grow daily more nightmarish. Only the bicycle remains pure in heart."

Jose Antonio Viera Gallo: "Socialism can only arrive by bicycle" [maybe not the wisest quote to chuck around Stateside... chuckle]

The journalist, despite clearly being a 'gear-dependent' type of cyclist tried to work out how much he saved by cycling:

"Let's take just one London commuter as a case study (that would be me). The cheapest way for me to travel the five miles from home to desk would be to buy a £1,208 annual travelcard. My bike was pretty pricey, at £700. Let's say it lasts seven years, so costs me £100 a year. I'm no good with a spanner so I get it serviced probably once every nine months. A basic service costs £55, so that's £83 a year for maintenance. My lights, lock, shoes and clothes don't come to more than £150. Let's divide that across two years – so £75. So cycling to work costs me about £258 a year (you could do it for less). Take off the £200 a year I spend on the days I'm forced on to public transport and I save £750 a year. That's enough for 266 pints of beer or a return flight to Sydney."

£55 for a service?! I pay about €13 down my local bike shop but nevermind that. And people could save even more cash by just buying a normal bike and using the clothes in the closet at home. [you KNEW I was going to say that, didn't you...] Nevertheless, it's a good indication of how people can save some money.

He also quote Cycling England's stats about the health benefits:
Cycling England estimates that every new cyclist saves the nation £382 a year in costs related to health, pollution and congestion. It says a 20 per cent increase in biking by 2012 would save £107m in premature deaths, £52m for the National Health Service and £87m in costs to employers through reduced sickness. A cut in pollution would save £71m a year, while reducing congestion would save £207m.

Here's the article from early January 2009.