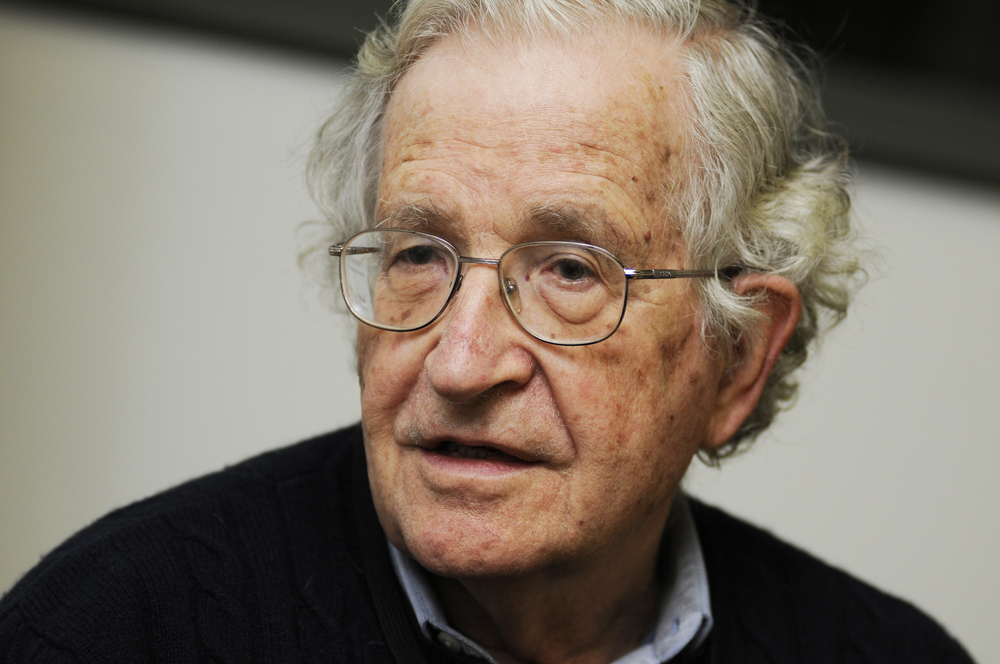 Some of you may be familiar with Noam Chomsky. He’s a big critic of the US government (particularly its foreign policy over the past one hundred years or so) and is quite good at using language to persuade people of the merit of his ideas; the fact that he spent decades as a linguistics professor and speaks with a calm voice probably helps him with this. While at various times claiming to be a libertarian and even an anarchist, Chomsky has routinely expressed distaste for American libertarianism and capitalism. This article will examine the following quote from Chomsky about some of those subjects and see whether or not his criticisms are fair:

“Now, there are consistent libertarians, people like Murray Rothbard [American academic] – and if you just read the world that they describe, it’s a world so full of hate that no human being would want to live in it. This is a world where you don’t have roads because you don’t see any reason why you should cooperate in building a road that you’re not going to use: if you want a road, you get together with a bunch of other people who are going to use that road and you build it, then you charge people to ride on it. If you don’t like the pollution from somebody’s automobile, you take them to court and you litigate it. Who would want to live in a world like that? It’s a world built on hatred. The whole thing’s not even worth talking about, though. First of all, it couldn’t function for a second – and if it could, all you’d want to do is get out, or commit suicide or something. But this is a special American aberration, it’s not really serious.”

The very first thing Chomsky does is describe Rothbard’s ideas as hateful. So right away he’s starting with a logical fallacy rather than an argument. And for those that dislike Rothbard or anarchism, Chomsky would say that about any type of mainstream American libertarianism. In the same sentence, he says “no human being would want to live in it.” This suggests that those who theorize about such ideas, agree with them, or want to live in a world with them in place are less than human. Readers won’t want to feel dehumanized, so his choice of words in this sentence entices them to reject the ideas before they’re even presented.

Next, Chomsky makes the assertion that roads wouldn’t exist in this type of world, only to contradict himself in the very next sentence by describing a way to build a road in the absence of government. On that note, he doesn’t explain why charging someone for using a road is a bad thing, or mention that we get charged for roads now through gas taxes, toll booths, etc. Further, many libertarians have suggested that businesses could provide roads; Walter Block, in a speech he gave about private roads, has compared this to how they currently provide parking lots for which customers aren’t charged to use. Here, Chomsky is fear-mongering by making readers think that basic, useful services won’t exist in a libertarian world.

Chomsky’s statement about pollution is strange, given his concerns about global warming. This makes it sound as if he doesn’t think pollution is a serious problem, or at least appears to think badly of the idea of suing polluters. This was the way pollution was handled until courts began allowing producers to pollute because the costs of pollution were supposedly offset by the benefits of their production. Also, as with the point he made about roads, Chomsky also doesn’t provide any alternative ideas for how these things could be handled. Most readers, though, wouldn’t notice, as they’d by this time be operating on emotion instead of reason.

Chomsky then reiterates his point that the world described in his quote would be a hateful world. In addition to this being the second time he’s mentioned this, it is yet another example of him failing to make any actual arguments and attempting to manipulate the emotions of the readers. He then creates a strange situation for himself by saying “the whole thing’s not even worth talking about, though.” If that’s the case, why did he devote a paragraph to discussing these ideas (in addition to poorly representing them)? Does he have nothing better to do with his time than talk about ideas which he says aren’t worth talking about? To finish it off, he asserts that a world like this couldn’t work, provides no evidence for that assertion, reiterates his point that nobody would want to live in such a world, and says “it’s not really serious.” Rather than making reasoned arguments, Chomsky instead utters one logical fallacy after another.

It’s one thing to disagree with someone’s ideas; it’s another thing entirely to disprove them. To effectively do that requires that the critical person understand the ideas, represent them fairly, and then demonstrate why they’re flawed using logic and evidence. However, rather than take the time to do that, people like Chomsky instead use emotional manipulation to belittle the ideas of others and persuade people to join their side. This is the sort of thing we libertarians are up against. If we can recognize, understand, and utilize the tactics of successful, persuasive people, we can be more capable of winning hearts and minds to the side of liberty and thus create a free world.

EDITOR’s NOTE: The views expressed are those of the author, they are not representative of The Libertarian Republicor its sponsors.

Can Taxation Be Replaced Through Advertising?