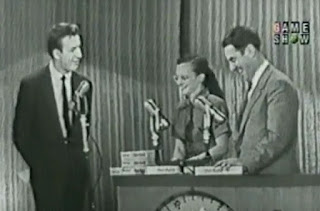 A thread on Game Show Paradise offers an odd assertion: "I have a feeling Mark Goodson may have been rigging shows such as Card Sharks and The Price is Right in the 1980s." As it stands, the comment is almost surely wrong. After the rigging scandals of the 1950s, game show producers in general and Mark Goodson in particular became very sensitive to anything that might remotely resemble rigging.

In fact, Goodson's squeamishness on the issue helped sink the 1983-84 Match Game-Hollywood Squares Hour. He forbade the practice of scripting the celebs on Squares, and that verboten helped turn the format into a dull, long-winded bore. (MG-HS had several other problems as well.)

As to whether Goodson ever tolerated practices that might be seen as rigging in today's world, the issue is a little cloudier. NBC news reader Tom Brokaw appeared on Two for the Money in 1957 when he was seventeen. In much later life he intimated the show was rigged. As I vaguely recall, this brought a screech from showrunner Ira Skutch, and Brokaw started backtracking quickly. In fact, in his memoirs Skutch tells a funny story of how the lack of rigging on the show cost the producers a lot of money. It was all about a question on words ending in "th."

It's hard to imagine why anybody would bother to rig Two for the Money, anyway, since the game was pretty much an afterthought. The show was mostly a monologue/interview vehicle for host Herb Shriner. You can sample an ep on YouTube.

There were some other practices on Goodson shows that fell short of actual rigging but wouldn't pass muster nowadays, like coaching contestants on possible freeze levels on the original TPiR. But once the scandals broke, Mark Goodson turned holier than thou about any kind of chicanery.