Five Things We Should Know About Money

He who loves silver will not be satisfied with silver; nor he who loves abundance, with increase. This also is vanity.
—Ecclesiastes 5:10

Look up the richest tycoons in town. Meet them at the country club for a game of golf or tennis; discuss their dreams. I predict you’ll discover that they are focused on getting more, especially as more can be equated with their happiness.

You can be the poorest peasant or the richest land baron, yet it seems you’ll always want more. The more we get, the more we want, the farther our happiness gets away from us. The fire is fed but never quenched.

Jesus said, “Take heed and beware of covetousness, for one’s life does not consist in the abundance of the things he possesses” (Luke 12:15).

There aren’t many “Uncle Bud” Robinsons among us. Robinson, a well-known holiness preacher of an earlier generation, was taken by friends to New York and shown all the sights of the city. That night in his prayers, he said, “Lord, I thank You for letting me see all the sights of New York. And I thank You most of all that I didn’t see a thing that I wanted.”

Wouldn’t it be wonderful to be truly content? To be eased of the burden for more accumulation, and to be at peace with where we are in life? Why do we make ourselves miserable over what has no track record of satisfying?

Part of Paul’s incredible power in his ministry came from this trait: “I have learned in whatever state I am, to be content: I know how to be abased, and I know how to abound. Everywhere and in all things I have learned both to be full and to be hungry, both to abound and to suffer need” (Philippians 4:11-12).

There is wisdom and power in knowing how to be content with much or little. 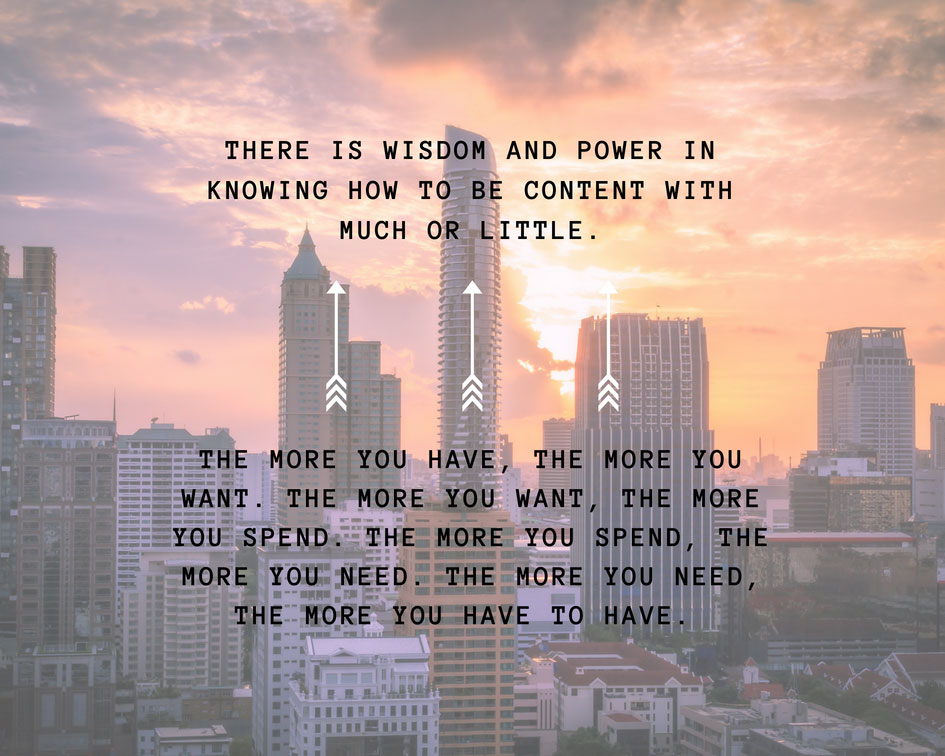 When goods increase, they increase who eat them; so what profit have the owners except to see them with their eyes?
—Ecclesiastes 5:11

The big promotion comes through with its expected raise. We could simply keep the same lifestyle and use the extra money wisely, but in a microsecond we are salivating over the prospect of new cars, new furniture, perhaps a second home. Solomon says that when possessions get thick, so do we. He wants to know, what’s the point of having more money? We’ll just go out and spend whatever we get. After all, a few more possessions never hurt anyone, especially if they supplied just a few moments of happiness, right?

The Message puts the concept this way: “The more loot you get, the more looters show up.”

Author William MacDonald says, “When a man’s possessions increase, it seems there’s a corresponding increase in the number of parasites who live off him: management consultants, tax advisers, accountants, lawyers, household employees, and sponging relatives.”

The sleep of a laboring man is sweet, whether he eats little or much; but the abundance of the rich will not permit him to sleep.
—Ecclesiastes 5:12

When you can fit all your life’s valuables in the backseat of your car, you can sleep well at night because you’ve cut down your “worry field.” By God’s grace I can say I’ve never lost a night’s sleep over the status of my investments. Many people think that the more money they have, the happier they’ll be, and the more soundly they’ll sleep at night, but the opposite is true. The more they get, the more they worry about preserving it.

When money is your shield and bulwark, you’ll spend all your time worrying about what will happen if you lose your shield. Thankfully, my Shield and Protector is One who has already said, “I will never leave you nor forsake you” (Hebrews 13:5).

When he was 53 years old, John D. Rockefeller was the world’s only billionaire. His income was $1 million per week. But he was a sick man who lived on crackers and milk and could not sleep because he worried so much about his money. Eventually, he learned how to give money away, and his health improved radically. As a philanthropist, he lived to celebrate his 98th birthday.

Elderly couples reminisce about the box of macaroni days in the tiny apartment. They conclude that those may have been the best times in their marriage. The Great Depression was a severe time for people, yet many folks have remembered those same years fondly.

Lack of money flushes us out of self-satisfied isolation. It forces us to go out and meet people and to need some of them. As we grow richer, we draw away from community. We miss a lot of the little graces and relational encounters that make life real and satisfying, that help bring a taste of true happiness—and we replace them with trinkets that never live up to their shiny allure. 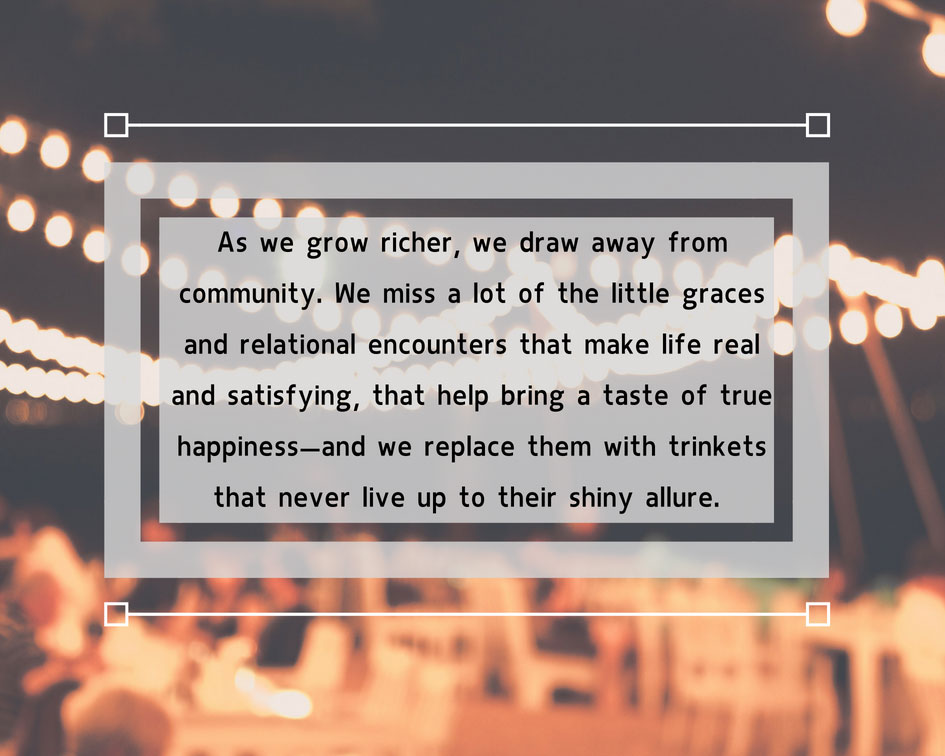 There is a severe evil which I have seen under the sun: riches kept for their owner to his hurt.  But those riches perish through misfortune.
—Ecclesiastes 5:13-14

Let me be clear on this point, because it’s easy to misunderstand what Solomon is saying. The essence of his message is this: You can’t lose what you don’t have.

We shouldn’t avoid seeking things just because we could lose them. But we realize from the very beginning that we are adding one more element to our lives, one more dependency, one more responsibility. Anyone who has ever bought a home for the first time understands that concept. We become attached to our possessions at our own risk because we now have so much more to lose. And soon our happiness, our joy, our peace depends on how protective we are of our possessions.

When he begets a son, there is nothing in his hand.  As he came from his mother’s womb, naked shall he return, to go as he came; and he shall take nothing from his labor which he may carry away in his hand.  And this also is a severe evil—just exactly as he came, so shall he go.  And what profit has he who has labored for the wind?  All his days he also eats in darkness, and he has much sorrow and sickness and anger.
—Ecclesiastes 5:14-17

We all know the modern translation of this one: You can’t take it with you.

It’s just common sense. You pay sweat and toil for the things you accumulate. But you never own anything permanently; you only rent it for a season, until you pass from this earth. Your precious possessions, even if they outlast you, will belong to someone else.

The flip side of that coin is positive: Much good has been done by sizeable bequests to charities, Christian ministries, or individuals. Accumulation can work hand in hand with goals for God’s kingdom. For now, we only need to remember that in eternal terms, there is no own—only loan. And the more we give away, the less we worry, and the more happiness we can find here. Jesus reminds us to act wisely, therefore, and invest in the treasures that are indeed permanent, for they are fixed in heaven. “But lay up for yourselves treasures in heaven, where neither moth nor rust destroys and where thieves do not break in and steal. For where your treasure is, there your heart will be also” (Matthew 6:20-21).

One way we find heaven on earth is to make investments in it from earth. And that bank is accessed through what we set our hearts upon. 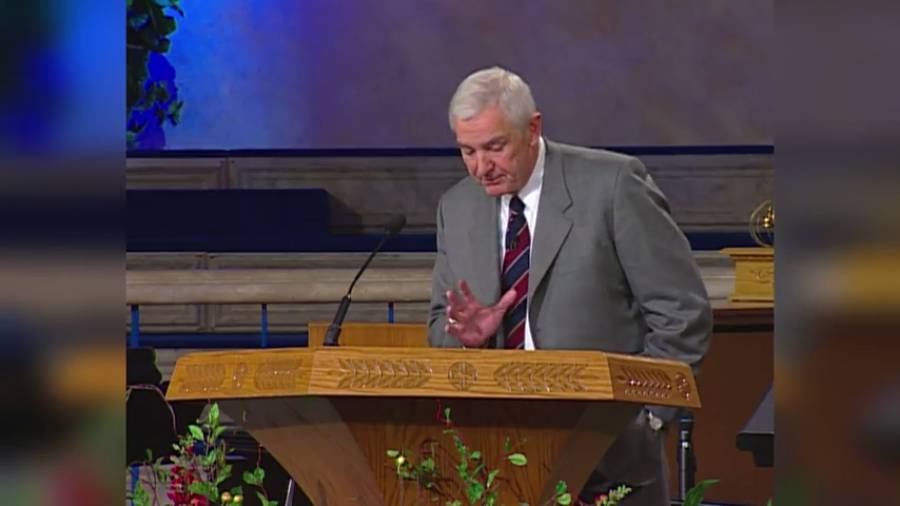