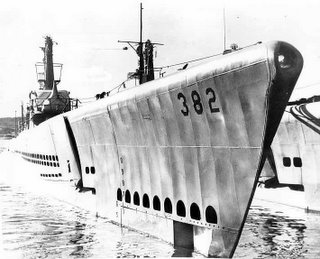 There were a lot of “cultural shock” things that I was introduced to in the next few weeks. That first night I had a very nice supper and met another 15 or so shipmates (I could use that term now) who were all very nice but about five of them insisted on calling me Puke. My next shock item was the term “Hot Bunk”. That term came into my lexicon when I asked where I could stow my sea bag and where my rack was. The COB gave me a brand new, small bag that I could use to hold some of my personal things, whenever I got my own bunk but until I got qualified, I would probably not have my own bunk. In silence I screamed “WHAT NO BED OF MY OWN!!! What kind of place is this? In sub school I got my own Bunk. In Machinist Mate School I got my own bunk. Even in Boot Camp I had my own bunk and now they are telling me I don’t have a bunk to call my own. This sub thing is small and cramped. I’ve already knocked my head half a dozen times and the place literally stinks. Everything, including the people, smells like diesel fuel. I wonder if my Congressman knows about this?”
What would take place, according to the COB “you are now eligible for “Hot Bunking”. It is a ritual that all new submarine sailors looked forward to and participated in”. “Being a “Smoke boat sailor means being the best the Navy has to offer and it means having to give up a few things, now and then, to be a proud member of ‘The Silent Service’. He stuck out his hand and said “Welcome sailor.” He also added, as he was leaving the crews mess, “you’ve got your qualification card there, you have nothing to do, so what better time to start on those quals!” The half dozen or so sailors still in the crew’s mess laughed heartily and shook their heads as the Chief exited. Apparently it was at my expense but I wasn’t sure yet, just why.
When the boat is in port, there is always an enlisted man on watch, topside and one on watch below decks. The below decks watch had been sitting in the hatch between the forward torpedo room and the mess decks and had enjoyed the COB’s welcoming speech. Still laughing he walked over to me stuck out his hand and said, “Welcome aboard Dick, that was a speech I had not heard yet.” “Grab a cup of coffee and follow me; I’ll show you your new home.” We started in the forward torpedo room, talking about torpedoes’ and headed aft. I don’t think Larry stopped talking for the next two hours until we finished up in the after torpedo room and he was done showing me how to flush the toilet. The most disturbing part of my walk through was the explanation of the term Hot Bunking. 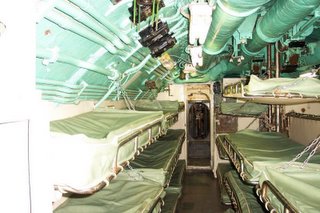 This is a picture of the interior of the Cavalla ss 244. note flash covers on bunks.Door leads into after battery head. Hatchway [oblong] leads to forward engine room

It meant that when I wanted to sleep I would go look for an empty rack (which was usually someone’s bunk that had just got up to go on watch and the bed was still warm, hence the term “Hot Bunk”) and use that bunk for the next four hours. It seems that all of this was caused because there were more sailors than bunks. The bunks were mattresses enclosed in a Naugahyde “flash cover” which was meant to keep the bunk clean when not in use or to keep us non-qual Pukes off the bedding. Before crawling in you were to pull the flash cover closed and sleep on top of it. This would mean that we would wake up in a pool of sweat, which resulted in lots of pimples. My mother never would have approved.

The scariest part of the tour was in the after torpedo room head. The toilet flushing routine was very complicated. You had to open the flapper at the bottom of the toilet to drop everything into a holding tank under the toilet. So far so good but if someone had messed up the procedure, before you, and there was still a pressure in the tank, then when you opened up the flapper the contents of the toilet would be in your face. Next you had to open and close a bunch of confusing valves in a special order. You even had to call someone to get permission to blow the tank. There were lots of ways you could blow shit on you or on a shipmate that followed you. What if that shipmate was the COB??? If it was wartime and the enemy was hunting you and you blew the tank without permission then the enemy would kill you with a torpedo. The whole thing was way to confusing for me. I just never used that head again.

I spent the rest of the evening sitting at a table in the mess decks getting use to diesel tasting, coffee. About 10 sailors joined me, off and on, welcoming me and offering advice. Some were qualified and others weren’t. I found out that the COB really was my Mom and would hold all sorts of things over my head such as liberty. We were allowed “Cinderella Liberty”, which meant that we would get to go “ashore”, “on the beach” but we had to be back on base by Midnight. The catch to all of this was that the COB held all of the Liberty Cards and you couldn’t get off the base without one. Marine Guards were at the gates and they would shoot you if you tried to get off base without a card or were late coming back. 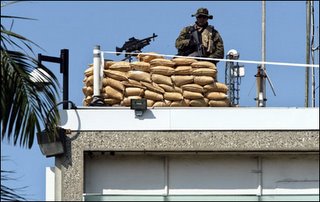 It was simple, if you were not up to date on your qualification schedule, no card, no women to chase. When you got qualified you got a permanent liberty card, which let you stay out after midnight drinking, carousing, chasing women and your own bunk verses “I would be kicked off the ship, a disgrace to the Navy”. What an incentive to get qualified. I headed for the berthing area and looked for a “Hot Bunk” to rest my confused bones. This wasn’t going to be easy.
Next up: Qualifications --coming soon