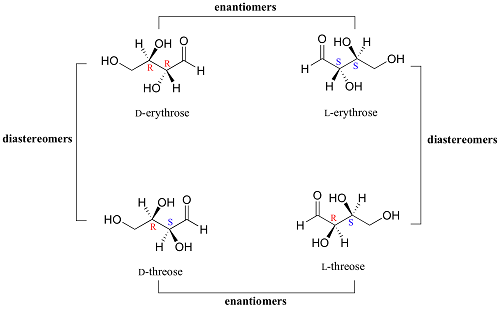 The challenge of many chemistry students studying stereochemistry emerges in the distinction between enantiomers and diastereomers. These are common molecular compounds with different characteristics despite being the stereoisomers – compounds with the same molecular and structural formula but different orientation of atoms. This article will elaborate on the difference between these two common compounds to enlighten you.

These are the chiral molecules that are mirror images of one another, and are not superimposable. A chiral molecule has an image that is not the same as its mirror image and it is typically characterized by a carbon center with 4 different atoms bonded to it. These atoms must be chemically distinguishable for a molecule to be qualified as a chiral and thus an enantiomer. The tetrahedral carbon to which the different atoms are attached to is called the stereocenter. See the difference below between a carbon that is regarded as chiral and the one not qualifying. 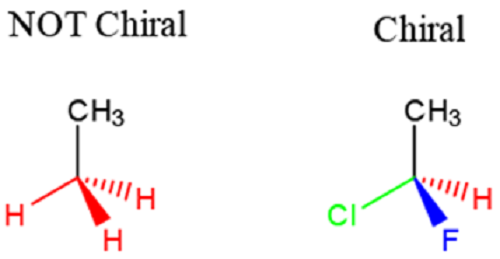 Fig 1: An Illustration of chiral and non-chiral molecule[1]

Because there is a slight difference in the spatial arrangement of the atoms of enantiomer molecules, the Cahn-Ingold-Prelog naming system was established. The two molecules have the same formula and the structuring of the atoms so to identify them we have to label one the S and the other R, depending on the clockwise configuration of the atoms from the lowest atomic mass to the highest atomic mass. For instance, a stereocenter Carbon with Bromine, Chlorine, Fluorine and hydrogen attached respectively in clockwise direction, the molecule will be assigned an R, and if anti-clockwise, the molecule will be assigned an S because bromine has a the highest atomic mass and hydrogen the lowest.

The arrangement of these atoms actually helps determine the properties of the molecule. Consider the bromochlorofluromethane structures below:

It is apparent that the orientation of the hydrogen and the fluorine is different but of the same molecular compound. No matter how many times you can rotate the right molecule, it will never have the same orientation as the left molecule. If, for example, you try to swap the Fluorine and the Hydrogen around, the Bromine and the Chlorine will also change their positions. This clearly explains the non-superimposable and mirror images concepts of enantiomers.

To name the molecules, the chiral (stereocenter) is assigned a letter S or R. The constituents, thus the Fluorine, Chlorine, Bromine, are labeled from high to low atomic mass assigning 1, 2, 3. Bromine is the highest so is assigned 1, the Chlorine 2 and the Fluorine 3. If the rotation is 1 to 3 in clockwise then the chiral center is designated R, if counterclockwise, then S. That is how the Cahn-Ingold-Prelog system works in distinguishing enantiomers from each other. It becomes simple when we work with one chiral center with 4 unique substituents attached to it. An enantiomer can have more than 2 chiral centers.

These are the stereoisomer compounds with molecules that are not mirror images of one another and that are not superimposable. The perfect example of diastereomers is when you look at the cis and trans isomer structures. See the cis-2-butene and the trans-2-butene structures below:

The compounds are identical but the arrangement is different, and they are not the mirror images of each other. When the CH3 are on the same side, the compound is cis and when the other is swapped with the Hydrogen atom, we name the compound trans. But the cis and trans structures are not the only examples of diastereomers. There are plenty of these molecules, as long as they demonstrate the spatial arrangements of atoms that are not mirror images of each other, and that are not sumperimposable.

The table below will highlight the key differences between the enantiomers and the diastereomers in a nutshell:

We have also seen how the naming of the structures of enantiomers unfold with the R and S naming system assigned based on the atomic mass of the substituents attached on the chiral center. In diastereomers, only one structure has the R and S configuration while the other has same configurations. This is what distinguishes them from enantiomer mirror images.